In Alberta, guard donkeys have become popular as protectors of sheep and cattle and perform very well under certain conditions. 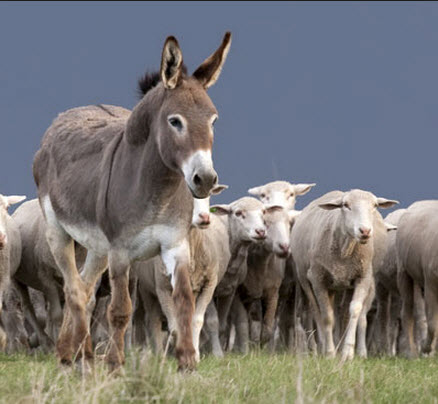 Donkeys probably do not deliberately protect livestock. Many donkeys dislike and are aggressive towards dogs, coyotes and foxes and provide indirect protection

Donkeys do not intentionally patrol the pasture looking for intruders. They investigate disturbances within the herd or flock and will pursue predators or intruders if they detect them.for domestic animals. Donkeys have exceptional hearing, a keen nose and excellent vision. They use these senses to detect intruders. They bray, bare their teeth, chase, and attempt to kick and bite dogs and coyotes. Some donkeys will also chase deer, bears, strange livestock, humans and other intruders in a similar fashion.

They are most successful in protecting livestock in small and level pastures, where the donkey can see all or most of the area from one location.

In addition to the aggressive behavior of the donkeys, the presence of a large animal with smaller livestock may be sufficient to cause some coyotes, dogs and other predators to avoid the area.

A guard donkey is a working animal so it must be sound, healthy and free from any conformational defects. It must be reasonably friendly towards people and easy to handle.

Attributes that contribute to effective guard donkey performance are as follows:

Halter break the donkey to lead. Train the donkey to lift its feet for veterinary and farrier work and to load and unload in a stock trailer or truck.

Guard donkeys may need several weeks to adjust to livestock, so introduce them to stock well before predation is likely to occur.

Place a new donkey on the other side of a common fence line with livestock. This gives the donkey and the livestock an opportunity to safely get to know one another.

A week to ten days following this socialization period, lead the donkey around the cattle or sheep where they can smell and touch each other. Then tether the donkey inside the pen with the stock and feed and groom it there for about a week. By this time both will have accepted each other. Allow the donkey to run loose in the pen or pasture and soon the stock will seek the donkey out in times of danger.

Feed the donkey with the stock so it feels like a member of the flock or herd. If stock are fed from troughs, feed the donkey first from a separate feeder or bowl so the livestock can eat unhindered. Always feed the guard donkey something every time you feed the stock.

Keep all dogs away from donkeys and do not test the donkey by teasing it with a dog. Do not allow farm dogs to become friendly with the donkey. Avoid or limit the use of stockdogs around donkeys.

If a donkey is aggressive towards or fears stock (or vice-versa) remove it immediately.

Donkeys are most effective in small, open, level pastures where the stock tend to band together. The maximum number of livestock that can be guarded by a donkey is unknown, but is probably no more than 200 animals. Donkeys will probably be of little use on rolling terrain or rangeland covered with heavy bush where stock scatter widely.

Use only one donkey at a time with livestock. This is important in larger pastures because donkeys may pal up and wander away from the stock.

There is one exception to the single donkey rule; a jenny with an unweaned foal tends to be much more protective than other donkeys. A mother with a foal will give you an extra advantage because young donkeys will be raised with livestock and trained for your use or sale as a trained guard donkey.

When more than one donkey is needed to guard a very large area or large flock or herd, use jennies with unweaned foals only. Some producers are successful with two geldings, but this is rare.

Fences must be in good repair because donkeys may escape through holes when wires are broken or missing.

Remove the donkey during lambing or calving, particularly in confinement operations, as a precaution against accidents or intentional injury or disruption of the mother-newborn bond. Place the donkey in the flock when the young animals are ready to go to pasture.

Proper care of the guard donkey is extremely important, especially hoof care. Trim the donkey’s feet regularly so the donkey will be able and willing to chase predators.

Donkeys have relatively small feet and can easily fall and injure themselves walking or chasing a predator in icy or slippery areas. Keep the donkey away from these areas.

Keep donkeys away from feed grains or additives containing anabolic agents such as Deccox, Rumensin or Bovatec. These products are poisonous to donkeys. Also, keep donkeys away from premixed, high energy feeds for sheep and calves because they may cause laminitis (founder).

Provide fresh water for donkeys during cold weather because they are more prone to impaction due to dehydration than horses or other livestock.

Donkeys are susceptible to the same diseases and parasites as horses and need regular vaccinating and de-worming. Consult with a veterinarian for the appropriate vaccine and deworming treatment.

Provide fortified trace-mineralized salt in block or loose form in the pasture or by the shelter.

More information on Donkeys and Mules: